There is an old saying that we should ‘let sleeping dogs lie’ and to be certain, there are sometimes when it is absolutely true. Even though we may wake a sleeping dog from time to time, however, there is never a reason why we would mistreat the animal in a cruel manner. Some people continue to do it, however, perhaps out of frustration over their own pathetic life or because it makes them feel powerful. In most cases, humans who abuse animals are able to get away with it but every once in awhile, karma turns around and pays them a visit.

We can see evidence of this in a parking lot in China. A man pulled up to his favorite parking spot but there was a dog in it, so he proceeded to get out and kick the animal. He was able to get in his parking spot but later, the stray dog returned with a pack of his friends to give him a taste of his own medicine. They didn’t attack him directly but they did attack his car, and his neighbor was able to capture it on video. 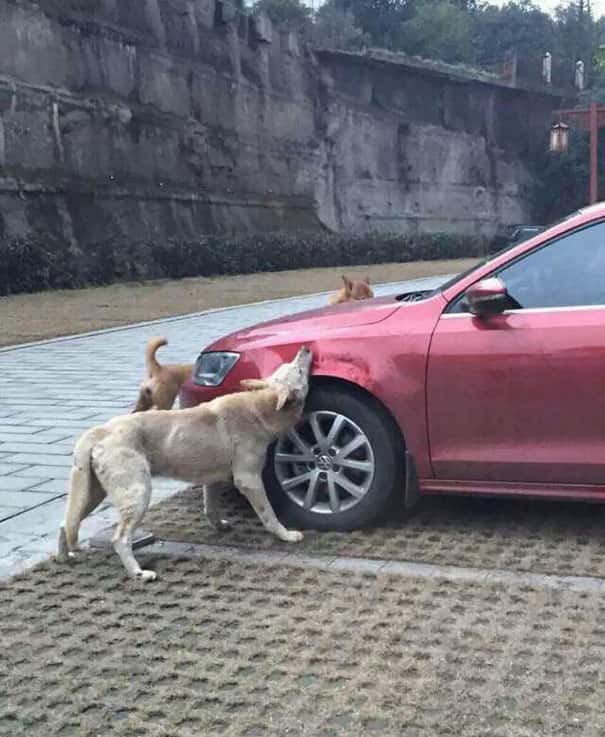 The reports say that he kicked the stray dog outside of his home in Chongqing, China rather than simply shooing the dog out of his spot. He decided that violence was a better option, but it turned out to be the worst choice.

After the dog was kicked, he left the parking space and the man parked his car and went home. Within a few minutes, everyone in the parking lot saw something shocking. The dog returned to the area with some of his friends and took it out on the car.

According to the reports, they chewed on the frame of the car as well as the windshield wipers.

As you can see in the picture below, they were smart enough that they had one of the dogs act as a lookout to make sure that nobody was coming. It’s interesting to see how methodical they are when destroying the man’s car and the neighbors must have been amazed when seeing it. 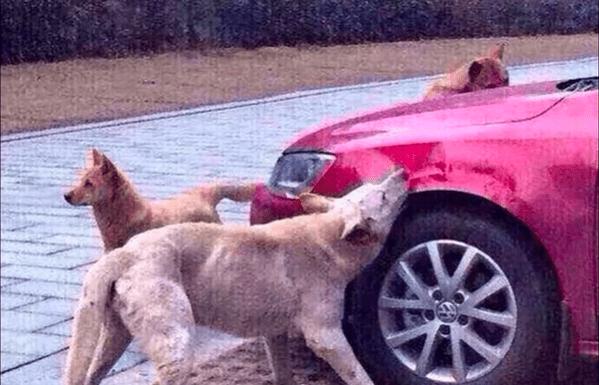 Considering the fact that the frame of the car would have been full of bite marks, it would have been easy to tell who was responsible. In China, there are no laws that protect the animals that are abused. Dogfighting is widespread in Northern China, with strays being thrown into a fight without a second thought. 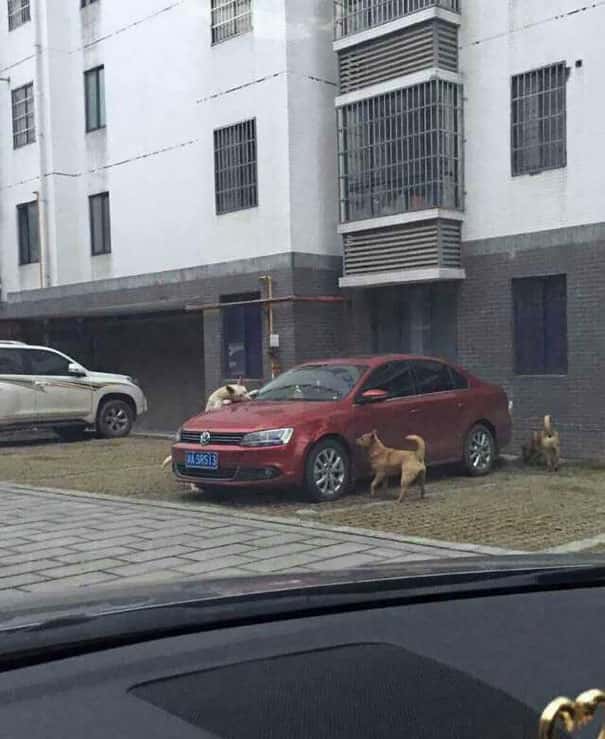 Every once in a while, we see that karma steps in and takes care of matters. I’m sure that this was frustrating for the driver and perhaps he will think about it before doing something like this again.

People love the video and they have a lot to say on the matter:

“Love that the neighbor took photos instead of helping out, you don’t want to mess with Karma while she’s working her magic do you!”

Another commenter added: Shame they didn’t trash the car more of this b*****d of a car owner……what kind of person would actually kick a poor homeless animal? Kicking any animal shows what a b*****d this man is

There were also some people who seemed to take the side of the driver, including André Ferreira Gomes Sampaio, who wrote: “To everyone saying poor doggies you should visit Bucharest, the dogs can be aggressive and attack you for no reason (like it happened to me). The driver is not to blame but the government is by not getting rid of stray dogs… Maybe the driver kicked one because he looked dangerous, as they usually bark and run after the wheels of cars. And if you don’t do anything and get bitten, you won’t be able to work for a few days because you will need to take anti-rabies shots.. but yeah.. blame the driver why not”

Most people, however, were on the dog’s side.

Elephant Who Kept In Captivity His Entire Life, Finally Gets Freed!

Homeless Pup Found Covered by Flea and Rotting Worm on His Back
29 July 2020
https://boredbird.net/driver-who-kicked-stray-dog-watches-car-get-destroyed-after-same-dog-returns-with-a-few-of-his-friends